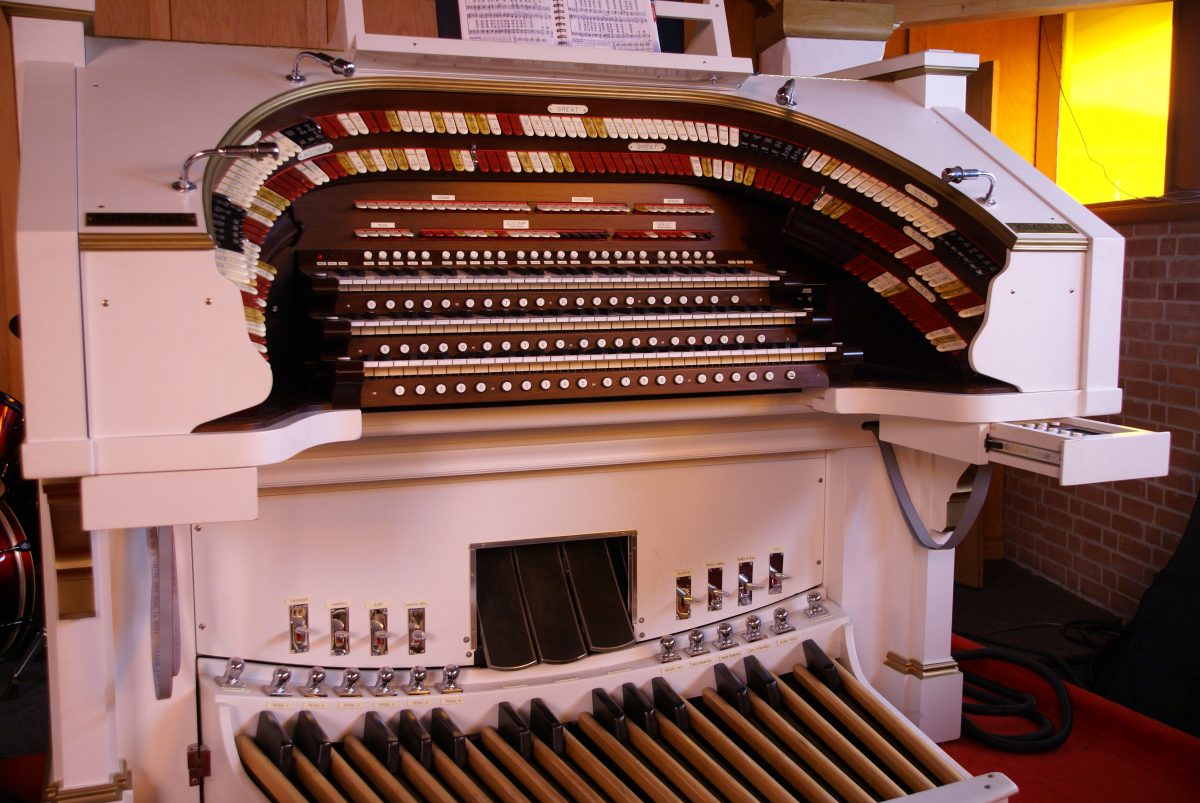 Since 1981 they’ve come from far and wide to see and hear Canada’s largest Theatre Pipe Organ, located in the historic university and military city of Kingston, Ontario. The 3/28 Kimball Theatre Pipe Organ is the proud showpiece of the Kingston Theatre Organ Society (KTOS).

What is the KTOS?

The KTOS is a (decidedly) non-profit registered charitable organization of local theatre organ enthusiasts – musicians, technicians and avid listeners – who got together to bring a modest-sized “retired” instrument to Kingston from a soon-to-be-demolished Ohio theatre and professionally expanded it from 12 to 28 well-balanced ranks of pipes, with a modern electronic control system. As in the theatres of old, the strictly functional pipes and working parts are out of sight, not to distract from the artist in the spotlight.

The KTOS is also a member of the Kingston Arts Council and is the only Canadian Chapter of the American Theatre Organ Society. (Further information: Roy Young, KTOS President (613) 6218 )

Our Kind of Music

Pipe Organs are measured in size by the number of ranks of pipes, a “rank” ranging from 61 to 97 pipes. Some ranks are doubled or tripled by adding slightly detuned ‘celeste’ ranks which add a shimmer to the sound, just as many not-quite-in-tune violins sound richer than a single violin amplified. At 28 ranks the Kingston Kimball is the largest of this kind of organ in the country.

Built in Chicago in 1928 for the State Theater in Youngstown, Ohio, the organ was rescued in the late 1970s and brought to Kingston. When no available suitable theatrical venue could be found, the organ was professionally installed, with much volunteer help, in the Anglican Church of the Redeemer in north Kingston. From an original 12 ranks, the instrument has been expanded to its present 28 ranks plus piano. Cumbersome electro-mechanical relays have given way to a state-of-the-art electronic control system, including the magic of digital replay. Visiting performers marvel at the acoustic control possible with unusally large (and silent) swell shutters.

The console can be rolled out to centre-stage for cocerts, where it rises on a lift for better viewing.

In the two chambers, Main and Solo, the pipework and percussions are mounted on three levels, behind four sets of shutters. Expansion over the years followed the detailed plans of the renowned U. S. experts Allen Miller and Clark Wilson.

Plus a vast array of drums, cymbals, bells and whistles.

What is a Theatre Organ anyway?

It’s the glamorous showbiz cousin of the traditional church pipe organ; a showy survivor of the golden age of the big-city movie palace – an age when the Paramounts and Capitols pulled in moviegoers in droves. Like a conductor, the theatre organist can mix and match a feast of delicious tone colours, percussions and all, in a thousand ways.

With the stage curtains closed after the newsreel, rich wall-to-wall music would pour out from high above the box-seats as down below a spotlight picked out an organist at a spectacular console slowly rising from the orchestra pit. Every spine would tingle through ten minutes of lively Broadway hits or Strauss waltzes, capturing the attention of the full house and building anticipation for the coming feature film.

Impractical in today’s multiplex boxes, of the hundreds of theatre organs that once pulled in the crowds, few survive in their original venues, notably New York City’s Radio Music Hall, the giant Fox theatres in Detroit, Atlanta and St. Louis and the famed Chicago Theater. In London, a 5-manual cinema organ still capitivates crowds in the Leicester Square Odeon. Canada never had many and only Vancouver’s Orpheum still has its original organ. Our most famous was Shea’s “Mighty Wurlitzer” in downtown Toronto (powerful enough to once fill Maple Leaf Gardens and now entertaining in Casa Loma).